Meet Scott the mystery window cleaner in Great Yarmouth. He has washed more than 700 properties for nothing – in a bid to help local firms “bounce back” after lockdown. He pays his small team out of his own pocket, and estimates the work carried out to date has saved local firms in the region of £8,000. 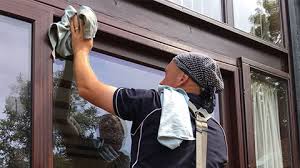 I could certainly do with him here. I have these cowboy window cleaners who spend roughly 30 seconds on each window and demand £25. I periodically terminate the agreement then in desperation think I will give them another chance. I have now washed every window inside the house so there will be no “I am sorry Mrs Felstein, but the dirt is on the inside.”  I hate it when my surname is pronounced Felstyne – with the emphasis on the ‘yne’.  Why does that bother me so much? I think because somehow it sounds derogatory.  Name aside I am now confident that any dirt that still remains on my windows after their 30 second swishing around with the cloth – will be their responsibility.  I will report back.

But thank you Scott for your generous communal spirit. Even though I cannot benefit from it.  What people do now count and can provide a meaning to life which has been sadly absent.

It is interesting how shared adversity can really foster a sense of community and affinity with others that can be masked in normal times. The challenge of course is how to sustain this after adversity ends. Which I am presuming it will. It is not just community that can find a silver lining to this pandemic it can also have a dramatic effect on the way society operates. For example the Black Death helped to end Feudalism, The Chernobyl disaster hastened  up the collapse of the Soviet Union (the verdict is out whether this was a good thing) and the experience of community solidarity and the states intervention during World War 11 encouraged the setting up of the welfare state. So, looking forward if we seize this moment in time, we have the potential now to change the way we live and make our society better. I am an optimistic pessimist – I hope for the best and prepare for the worst.

“Both optimists and pessimists contribute to the society. The optimist invents the aeroplane; the pessimist, the parachute.” — George Bernard Shaw

Sociologist  Michael Young (Lord Young of Dartington) spent his life documenting and fostering social solidarity in Britain  ( he helped found the welfare state in the 1940s ) In the 1990s, he wrote in a study of people dying of cancer  that death, while  separating  relationships, can also bring people together.  “Death is the common experience which can make all members of the human race feel their common bonds and their common humanity.” I think this is very relevant to COVID19 as when we see the number of deaths rise in the UK there is a collective feeling of empathy for those who have lost someone.  But oddly there is also a kind of awful normality to this. The more it goes on the more we accept and expect.

“So how many deaths today?

“Really still 250 but there was only 65 yesterday.

“Yes, but that was the weekend the figures always rise after the weekend. “

Who would have thought in January that we would be having these conversations over dinner?

And so, I continue with my lockdown – the rest of London might be opening up but here we will remain in lockdown until I see the numbers reducing significantly. And finally, our stones have arrived. Now the hard work really begins as we ferry 11 x 150 kilo bags from the driveway to the bottom of the garden, which is a mere 350 feet, down two flights of stairs in wheelbarrows.  We envisage two bags a day. Hopefully it will be finished by the anniversary of Tod’s death and Toby’s birthday on 17 June.