Glastonbury cancelled; Reading cancelled. WOMAD cancelled just a few of the many festivals that the young people and not so young people look forward to every year.

So, thought maybe this was a good time to remember the mother-son bonding experience of taking my 13 year old son to his first rock concert.

My first recollections are the sudden realisation that I would be spending three days in a mud-drenched field in Reading with my son, my sleeping bag and 55,000 rock fans. It didn’t go down well with some of my friends who remarked “You, at a rock concert, in a tent. . . with no en suite?”  I think they had forgotten I used to be a hippy. Glastonbury was part of my education.

The mother-son bonding got underway   as soon as we arrived as Zak  single-handedly erected the tent. The male self-help survival instinct, completely non-existent at home, took over. In full macho style – testosterone has its uses – he became at one with the mallet. His father would have been proud.

That evening, over our primus-stove dinner of Pot Noodles, I thought I had better broach what was on my mind. What does a responsible ex-hippy tell her son about drugs? The experts advise that parents need to keep the door open so the child will always feel able to talk to them. I wanted to say: “Look, there will be lots of drugs at this festival, and although I completely trust you, I think I should remind you not to be tempted to try anything. It isn’t that I think marijuana is terrible; just that you are too young. If, when you are older, say over 16, and you want to experiment blah blah blah” Pretty cool, I thought, and certainly not the message my mother gave me when she advised me against ‘reefers’.  But I had hardly got the first word out when Zak looked at me with that bored, Kevin expression and said: “For fuck’s sake, not drugs again, mum.” We left it at that. 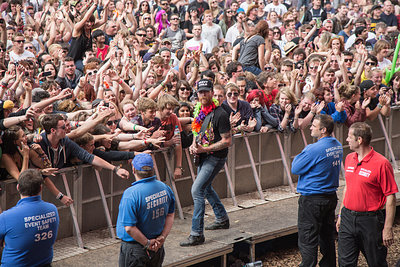 Poor boy, I don’t think he had realised that, after all, his mum might not be the ideal companion for a rock festival. But as the weekend went by, I couldn’t help noticing the way he trailed three paces behind me as we walked around the festival, refused to call me “mum” and indicated with his eyes that it was time to move on. The biggest giveaway was that he asked me not to get too excited and shout or dance when we were watching the bands together. And when I left the tent in the middle of a storm dressed in two black bin liners – he almost had an apoplectic fit: “You can’t go out like that mum, it’s so embarrassing.”

In turn, I tried hard not to be too much of a mother. So, when he ate salt and vinegar crisps and drank Coke for breakfast, I refrained from pointing out that fruit would be a much better breakfast choice. I managed not to panic when, at midnight, I watched thousands of people rocking in the main arena to an incredibly loud heavy metal band, knowing that my 13-year-old son was somewhere in the middle of the throng. I didn’t even ask the guys in the next tent to turn their music down at four in the morning. And I somehow stopped myself from listening to the Archers omnibus on Sunday morning.

As we left the festival, I could see that Zak was  obviously high on the experience – at least I hoped it was just the experience – and I knew that this was a moment to be cherished but perhaps not repeated.   I think we shared more laughs and special moments in four days than we had in the previous 12 months. Mother to a teenage son is not the easiest!

Fast forward 20 years and I had another mother son bonding experience with Zak when we took a road trip together to the south of France to visit middle son who was working as a chef in a small hotel.  We have to grab these moments whenever we can because they are rare, and they will always stay with us and with the children. I can almost hear them relating the experience to their children.  Just wish they would hurry up and have some!!!