I know we are living through a nightmarish scenario, but I have found a few silver linings.  One of which is a renewed sense of community – certainly more than I have seen in my adult lifetime.  As a child it was different. I grew up in a two up two down terraced house in the Highfields area of Leicester.  We were working class but with middle class values. If that isn’t an oxymoron.  Everyone on the street new each other and spent most of the time in an out of the different houses.  If one mum was working (it was a given that all men worked) then other mums would mind the children. We had no phone, no car, no television, no washing machine and an outside toilet. We used to get bathed in front of the fire on a sheet of asbestos. Maybe that is why I have COPD now.  In those days no one realised asbestos was dangerous.  The same with cigarettes. Both my parents smoked incessantly, and mum probably had a fag in her mouth when she was breast feeding me.

Oddly I remember a lot about the road even though it was eons ago.  The Batkins lived opposite and their son Terry was chronically shy and used to hide behind the sofa at birthday parties, even his own. The street flirt Jean, quite the glamour puss with her big breasts and tight jumpers fancied my father and wasn’t backward in coming forward in letting him know.  The German spinster who lived next door refused to talk to us because we were Jews until her house caught on fire and my mother saved her life. The Plumber boys were the resident bullies who lived at the bottom of the street and terrorised us kids into supplying them with bounty which was usually sweets or the odd penny.  I remember Brian and I barricading ourselves in the house while they threatened all sorts of nasty things should we ever come out again. And the lovely Polish family – who were ostracised by the rest of the street – not sure why maybe because they were foreigners – but they made fabulous goulash and kuchen which I was forbidden to eat because it wasn’t kosher.  I suspect I must have tried it otherwise how would I remember it being fabulous.

As soon as we were in lockdown someone on our road in North London started a WhatsApp group. And within days there were offers of help and goods being exchanged. The group has been quite wonderful. When my boiler stopped working within hours a local plumber was on hand.  When I was looking for yeast as I had no bread somebody left a box on my doorstep and when they knew I was on my own another neighbour left a bunch of daffodils to cheer me up.

This week the family 2 doors from us had a tragedy. The mother, in her early fifties, had an aneurism and was rushed into hospital where she has been operated on and is currently on a ventilator.  And within hours the street had rallied around to offer support to the devastated family.   A food rota was set up and I am making dinner on Saturday. It is heartening to see how much care there is

I am sure we are not alone and there are similar set ups all over the UK. My Scottish girl friend who lives in a small village sent me this pic below. 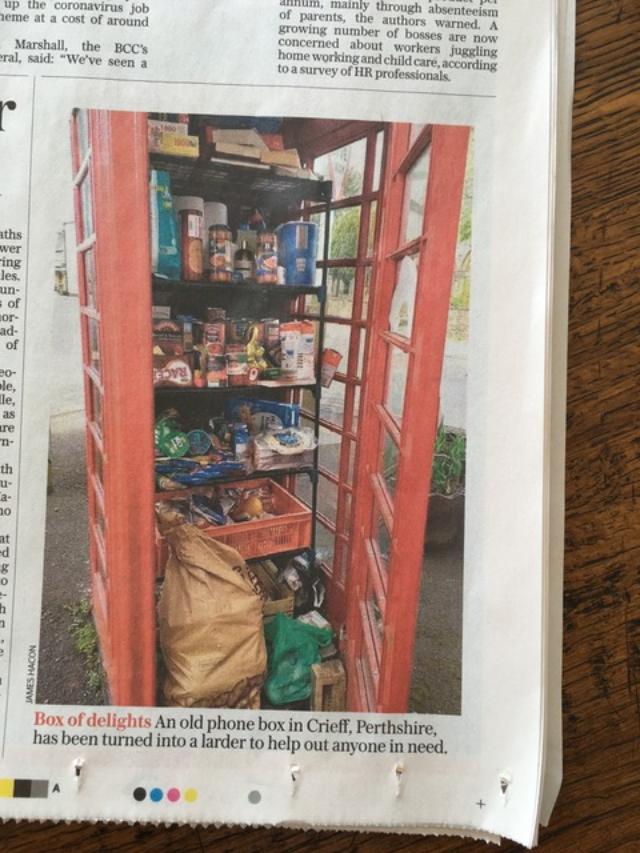 I do think we will all be changed by this experience and it goes without saying how tragic it is for all those who have lost their lives and their loved ones, but maybe we will come out of this with a different  and better perspective on life  I know that I certainly will.

Last night I couldn’t sleep as I was thinking of Helen. Only at the weekend we had swapped cakes. I had made banana cake and she had made cupcakes which we left on each other’s doorstep. And now she was in critical care. I think it is the randomness of it all.  It is not something I used to think about but now  I do dwell on it.  You can be a very good person live life healthily and then get cancer and die or walk in front of a bus or….and alternatively you can be a despot, liar greedy and cruel and live to a ripe old age.   And if it really is all random then where does God fit into this.   I know deep stuff.

And it is Thursday again and its clapping time.  Really where on earth did the last 7 days go? I know I keep banging on about this but how can time just keep flitting by especially when I manage to achieve less and less each day. I love the clapping it gives me a warm fuzzy feeling inside. I usually end up crying.  But at least tonight I won’t be returning to an empty house as I have company now.

So today was the first day that I have shared the house in 4 weeks. It is lovely but it takes a bit of getting used to.  It is odd talking and getting a real person answering me.  I am very disappointed though with Izzi who has been my constant companion never leaving my side, even following me to the toilet. And now – where is she? Well not with me. She is following Toby around.  And where did she sleep last night? With Toby.  She didn’t even come into my bedroom   – – where she has slept for the past 4 weeks, to say good night. Oh, you fickle creature. When they move out again, I will not forget this behaviour.  Don’t think it will all just go back to how it was when it was just the two of us.  And Mo is no better. She has spent the entire day fast asleep on my bed because that dirty little stop out didn’t come back all night.